Threats of Death and Violence From Scientology 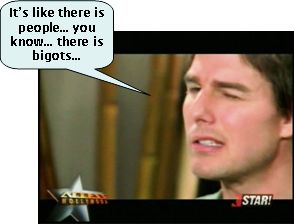 Never fear to hurt another in a just cause.» — L. Ron Hubbard, "Code of Honor", The Creation of Human Ability, p. 5

There is ample evidence that Ron believed and used that statement.  There is also too much evidence that Scientologists in general employ that clause.  Before we get into that, we have a special note from the Great Humanitarian himself, written in his own hand.  Many thanks to Gerry Armstrong for this: 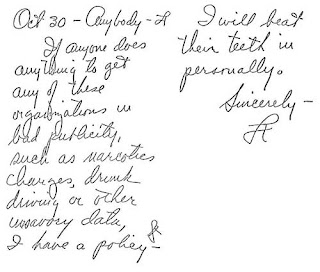 And here are a few more policies from Hubbard:

«If attacked on some vulnerable point by anyone or anything or any organization, always find or manufacture enough threat against them to cause them to sue for peace.» — L. Ron Hubbard, HCOPL 15 August 1960, Dept. of Govt. Affairs

«A truly Suppressive Person or group has no rights of any kind and actions taken against them are not punishable.» — L. Ron Hubbard, HCOPL of 1 March 1965, "Ethics, Suppressive Acts, Suppression of Scientology and Scientologists"

«ENEMY SP Order. Fair game. May be deprived of property or injured by any means by any Scientologist without any discipline of the Scientologist. May be tricked, sued or lied to or destroyed.» — L. Ron Hubbard, HCOPL 18 October 1967

«The sudden and abrupt deletion of all individuals occupying the lower bands of the Tone Scale from the social order would result in an almost instant rise in the cultural tone and would interrupt the dwindling spiral into which any society may have entered.» — L. Ron Hubbard, Science of Survival, p. 170

Do Scientologists believe this stuff?  You bet your life they do.  I will give you only a few examples, but if you look around you can find many, many more.  What you will find is that the policy of death and violence started at the very beginning of Scientology and continues right up to this day.

I started this blog post because I saw this:


There, according to Rezendez, the Narconon official warned the newsman he was "a small fish in a big sea with a lot of f•cking sharks" and that he was dealing with an interplanetary organization." Barber allegedly promised to come after Rezendez with "hobnailed boots," and said "I will kick your ass up into your throat if I ever catch you f•cking around with Narconon." - "The Narconon sting: Scientology's Minnesota drug scam" by Paul Fishman Maccabee 1981

I knew some bad things had happened in Scientology, but I had never heard of threats from Narconon before.  So I asked my good friend, investigative reporter David Love (former Narconon staffer and now outspoken critic) if anything like this had happened to him.  He kindly responded by sending me a copy of his submitted evidence to the SQ Intelligence Police in which he says that Aline Proulx (who was, at the time the Esto Officer of Narconon TR and was the former Executive Director of Narconon Canada Continental) had confided certain sensitive data to him, and then told him "If you ever divulge any information I've told you, I will scourge you in HELL and YOU will disappear!"

Which got me to thinking how many instances of this has happened in Scientology.  I found way too many to list in this post, but here are a few.


As a result of the book "L. Ron Hubbard: Messiah or Madman?", author Bent Corydon says, his assistant was beaten and his wife abused with repeated obscene and threatening telephone calls.

Shawn Lonsdale, a videographer who protested at Scientology's Flag Land Base in Clearwater, FL. was told by a Scientologist "People don't live too long doing this kind of thing in Clearwater."  On February 13, 2008, he was found dead in his home of an apparent suicide. Right.

Eugene Ingram, a  Private Investigator for Scientology said to Gerry Armstrong, "I'll put a bullet between your eyes."   Later Judge Breckenridge in his Decision in Church of Scientology California vs. Gerald Armstrong, No. C420153 said ". . .being assaulted by one of these individuals; being struck bodily by a car driven by one of these individuals; having two attempts made by said individuals apparently to involve Defendant Armstrong in a freeway automobile accident; . . ."

"Bernard Green recounted some of the more grisly tales floating around throughout the movement's disenchanted members with a relish bordering on glee. [...] a man in Los Angeles punished for some anti-Scientological action by having high-pressure water hoses turned on him until he was pounded senseless." - George Malko: "Scientology: the Now Religion - Epilogue"


Judge Ronald Swearinger of Los Angeles County Superior Court told The American Lawyer magazine that he believed Scientologists had slashed his car tires and drowned his collie while he was presiding over a suit against the church. - Syracuse Herald-Journal: "Lawsuit, privates eyes hound Scientology's legion of critics" by Douglas Frantz

The threats to personal safety were overt and continuous, totally different in kind and character from the little FOAD you were recently whining about. We're talking real, in your face, you are fair-game we can kill you sorts of threats." - Zane Thomas's Story

". . .He is prepared to speak out. Most are not. Scientology has a reputation for hunting down its critics. One man has taken to wearing an armored vest because of alleged threats against his life. One American former cult member claims that he was ordered to kill two opponents of the organisation. . ." - The Independent (Jan. 1994): "The Prisoners of Saint Hill" by Tim Kelsey and Mike Ricks

Mark Plummer (Warrior) describes assault by a Scientology staff member: "I’m gonna kill you!", while shoving me backwards with both arms against my chest.

A Mexican woman has alleged that the Church of Scientology's security chief chased her and threatened to kill her for leaving the church ... She told Miller that a Scientology security guard had said to her, "You're a suppressive, you denigrated the church. We're going to kill you! You will be dead!" - St. Petersburg Times: "Woman accuses Scientology guard of threat"

"A Scientologist in Heidelberg is convicted to pay a fine for threatening to murder a 17 year old, who was critical of Scientology." - FAQ: Scientology in Germany

Arnaldo Lerma was told, "We will give you a guarantee of safe passage out of the state of Florida with all body parts attached if you tell Suzette Hubbard the marriage is off." - Scientology story sparks heated response.

Paulette Cooper wrote - "I also received my first death threat that same month. I received one death threat after the article was published, but decided nonetheless to write a book on the subject." - "Looking over my shoulder: The Inside Account of the Story That Almost Killed Me"

Taz, the vocalist for Tampa Bay area band Trocar received an anonymous death threat by telephone at his work, saying that if he performed at the Lisa McPherson Trust benefit concert, he "wouldn't walk out alive." - Benefit Death Threat

"I was told ... to get the idea of leaving out of my head because I would never leave the property alive." - Affidavit of David Mayo (1 May 1987)

"Sheriff Lee Baca is curious. One of his own lieutenants has warned me that my life may be in danger from Church of Scientology paid hit men." - Graham Berry

Had enough yet?  I have.  At least for tonight.  Thanks for being here.  I hope you come back soon.