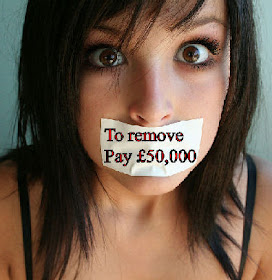 There have been more than dozens of cases of Sexual Abuse and Sexual Abuse of Children in Scientology that were never reported to officials or if they were reported, not until years later.  The reason is, in order to keep the dark side of Scientology out of the public eye, Scientologists may not take their legal differences, or even criminal complaints outside of the church but must handle them internally through mediation.  Also there is this.  Scientology ethics always assumes that if something bad happens to you, that you are responsible for pulling it in on yourself.

Then there is the policy of 1st of September 1965 entitled “Ethics Protection” written by Hubbard in which he says:

“When people do start reporting a staff member with a high statistic, what you investigate is the person who turned in the report. In an ancient army a particularly brave deed was recognized by an award of the title of Kha-Khan. It was not a rank. The person remained what he was, BUT he was entitled to be forgiven the death penalty ten times in case in the future he did anything wrong. That was a Kha-Khan. That’s what producing, high-statistic staff members are – Kha-Khans. They can get away with murder without a blink from Ethics…. And Ethics must recognize a Kha-Khan when it sees one – and tear up the bad report chits on the person with a yawn.”

This policy not only pertains to staff with high statistics, but public Scientologists as well, as long as they are big producers (bringing in lots of money).  Hubbard also said that he did not care what his staff members did as long as they were “ up-stats” (helped make money) for Scientology and implies that staff can get away with murder in a blink of the eye, and not to bother him with details.

Examples of these policies are rampant and I will only give you a few of them here.

First is the story of the late Alexander Jentzsch, the son of Scientology president Heber Jentzsch.  From the Scientology Cult website:

In Scientology Inc., the reputation of David Miscavige comes before all else. Which was also seen in the tragic loss of Lisa McPherson who, while she lay dying, was driven to a hospital 45 minutes away — no doubt to put some distance between her and the Flag Land Base where she had been neglected, while Morton Plant Hospital was only blocks away in the other direction. But of course putting PR first is just another way of saying "cover up."

And on that theme, Alexander had already fallen into a well-worn groove. Behold, Alexander Jentzsch was the victim of a child predator inside the Church of Scientology when he was 12 years old. The incident was covered up the Church of Scientology executives and neither the boy's father nor mother were ever told about it by the Church. Yet you can bet David Miscavige KNEW ALL ABOUT IT. He receives info on ALL potential legal liabilities. Karen only found out on July 2010 when multiple former executives from the area where Alexander was working contacted Karen and told her what had happened to her son. Here's what they said:

"I was a member of the Sea Organization from August 1989 till August 2007. It was when I worked in the Office of Special Affairs Flag Land Base, that I learned about the rape of Alexander Jentzsch, then a 12 or 13 years son of Karen De La Carriere and Heber Jentzsch. I started working in OSA in January 1997 and it was during that year when I learned about the rape through my then co-worker Annie Mora, who had been
assigned to keep an eye on Alexander from the point of time he was received at the Flag Land Base.

The rape incident involved a female FSO Dept 5 staff Marie Warren, seducing Alex to have sex with her in one of the crew berthing apartments. Once this incident became known by Annie Mora she was executing the immediate handling which included making sure the knowledge of the rape isn't  spreading not only inside the church but to the outside; it would have been devastating to the image of the church to have this crime become general knowledge. Another action was to transfer Alexander and Marie out of Florida to California to help cover it up from the Authorities. Needless to say Alexander´s rape was a huge flap and would be the kind of incident OSA staff would automatically deal with, hence my knowledge of it."

A Scientologist by the name of Donald Anthony Strawn, also known as Tony Strawn, was convicted in 1995 to thirty years in prison for sexually molesting two girls, ages 11 and 13. The children were in his custodial care at the time. Scientology directed (under threat of expulsion) that the mother not report the incident to the proper authorities, because the church could "handle" his "aberration".

I was 13 years old. I think I was 13. Everyone had beer and got drunk. I think the first night or the second night I was up there, I was sitting next to him and I had had a few beers and so had he. And so had  everyone else. And he put his hand down my shirt and down my bra and started feeling me. And I...it really scared me and I asked my friend later, I said, "What's Wally [Hanks] doing? Why did he do this?" And she said, "Oh. Don't worry. He just does that with the girls. That's just what he does but don't worry about it."

And along this line, Adeline Dodd-Bova said:

"These were the children of dedicated Scientologists. Students' files revealed previous teachers' statements of incidents of physical and sexual abuse. All of these cases were reported to the principal. The reports were "handled" by Scientology alone. Teachers dared not report these crimes on their own outside the school for fear of losing their jobs."

One little baby I knew in the Sea Org got herpes during a Cadet Org epidemic. A 14 year old girl disclosed to me how she and a few other little girls were leaving the Cadet Org in the daytime and performing sexual services for one of the girl's uncles in exchange for money. A man who worked in the Cadet Org admitted he was sexually molesting the children. Although these incidents were written up, as far as I know they were never "handled".

And finally the statement of Tommy Gorman:

It was around 2001, beginning in May when I decided to go see my friend Jennifer Stewart, because she was still on staff at the Mountain View Org. My mother asked “Tommy, have you talked to your friend Jennifer lately?” I said “No”. I thought about it and thought, hey I should call her. I called her home and her mother picked up the telephone and I asked if Jennifer was there. She said no, she is at Gabriel Williams’ home. Jennifer’s mother told me she would call Jennifer and tell her to call me.

Later that day I got a call from Jennifer. I was happy to be on the phone with my bud. I said, hey, can you come over tomorrow? And she said, I have to ask Gabriel, (who was also her boss at Mountain View Org). I said, no, you need to ask your mom and dad, NOT Gabriel. Jennifer said, NO, I have to ask Gabriel. So I said fine, ask him NOW. I heard Gabriel say “uhmm”, so I started to talk very loud and said, “Let Jennifer come over Gabriel.” Then Jennifer said, “Wow, Gabriel said I can come over!”

The next day I picked up Jennifer at BART ( Bay Area Rapid Transit ) at 4 pm. Jennifer looked a lot heavier, and not the same happy girl I knew. She was wearing a turtleneck. The day was kind of warm and I was confused because Jennifer had told me many times before she does not wear turtlenecks, because she hates them.

I gave Jennifer a hug and she jumped back, and I felt confused.. We then talked for hours in my car. I was joking with her about something and tapped her leg and she again recoiled from a touch. At one point I started to talk about Gabriel a lot, and then Jennifer threw up. I continued to discuss Gabriel because I knew something was very wrong.

Whenever Gabriel’s name came up she was say everything was fine, everything was great, over and over again. I thought this was very weird. It was as if she were in a trance. I finally started yelling at her, to tell me what was going on, and I asked her if anyone had hurt her. Then she started to cry, very hard, for a very long time, and kept talking but I could not understand what she was saying. I asked her what happened, but she said, that she could not tell me.

I asked if she was wearing her turtleneck because she was trying to hide something. I finally got her to let me look under the neck area of the turtleneck. Jennifer had some mark on her neck. When I looked at it closely later on, I saw that she had a right hand mark on her neck when I was looking at her on my left side. She had a thumbprint on her neck on my right side and a couple of finger marks. I asked Jennifer if I could see her arm, and then saw a mark on her arm, she told me she also had a mark on her leg. Jennifer said, “No one will believe me, and Gabriel will kill me and my whole family.” I spent the rest of that night trying to comfort Jennifer. I asked whether Gabriel did this, she said “yes.” She finally admitted that Gabriel had raped her. It was clear to me that Gabriel had threatened Jennifer’s life and had raped her and choked her.

Gabriel was a Scientology staff member at the org in Mountain View, and because of "high production" as reflected by his "statistics," meant that he made Scientology a lot of money. Because of this he was considered by Scientology policy, written by L Ron Hubbard, to be "above the law." This policy is called the “Kha Khan” Policy.

I knew the policy. And I knew that it would be a problem to report this to Scientology because they would protect him, because of his worth to Scientology, and that is exactly what they did. L Ron Hubbard’s policy states that SP’s (enemies of Scientology) always spread false and alarming rumors about up-stats, (high income producers). Hubbard directs staff to investigate any individual who reports or tells, on an “up-stat”.

There is no room in our society for a "church" to have a policy that "it's ok for you to do anything you wan't to people, especially women and children, as long as your stats are up and it doesn't get around".  Scientology still practices this.  Please see the video below.